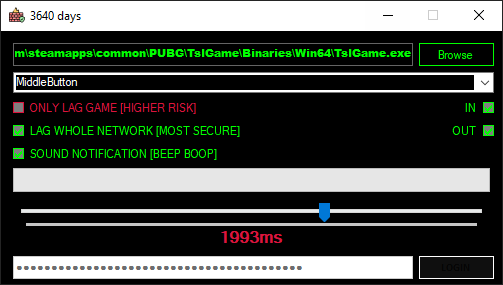 Working on most games!
This allows you to hide behind cover and shoot / kill enemies without them being able to see you or shoot back.

Block incoming == your client / game gets no information about, for example, new positions of enemies. That makes them "frozen" in spot. But some games, for example pubg, it sucks cause they also get stuck in last animation, if they were walking to the left direction, they will keep doing that.


Easy use with visual and sound notification:
A beep sound and visual loading bar signals you the start and end of the lagswitch.
Particially, dynamically changes per user / computer it is used on.


I recommend to always "LAG WHOLE NETWORK" and not a specific process.
"IN" and "OUT" stands for the direction where the network traffic is supposed to be blocked.
For example on EFT, if you block "out" - to others in the match you will freeze in the spot you are when you hit the lag-switch, on your screen however you can move.

When you freeze "IN", you can move and others also see you moving, but for you others are "frozen" in the position/animation they were in, when you froze.